This is a guest blog post by the Reverend Robert Thayer, Minister of the UU Church in Brockton, MA, and author of the popular book  Offerings: Remarks on Passing the Plate, in which this story is published under the title of Large Bills.

Some years ago I visited England and attended Sunday worship with some British Unitarian friends.  We sat toward the front of the church.  I was all tingly—both from the cold sanctuary and the warm glow of being on my ancestral soil.  The sermon was magnificent, and I was feeling effusive, very generous. 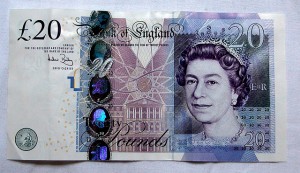 The moment came for the offering.  I reached into my wallet and saw a wad of British pound notes, but nothing particularly small.  I mentally shrugged my shoulders and pulled out a twenty-pound note, held it in my hand, and prepared to drop it in.  My friend shook his head at me.  I raised my eyebrows at him—why not?  He whispered, “It’s a rather large donation.”

I felt indignant.  Who was my friend to tell me I was giving too much.  I flapped the twenty-pound note in the air and whispered, “Are you sure?”

“See the usher?” he asked.  “I know he will be in shock.  He may fall down.  He has never seen a twenty-pound note in a collection except for famine relief in India.”

“Now you have me curious.  Let’s see if you are right,” I responded testily.

“Be mindful,” he warned, “that the usher will ask you after the service if you would like change.”

Well, it did not happen that way.  When I dropped the note in the plate, the usher initially reacted with a frown, but his face soon brightened with a proper smile.  Then I realized something very thrilling.  Because we sat in front, every British Unitarian on our side of the aisle that morning would see that note in the plate.  What an example, I thought.  On second thought, I remembered that since World War II the Brits have had a thorough familiarity with Yanks and many think of us as “over-sexed, over-paid, and over here.”

At the end of the service, I shook hands with the people all around me, including the usher, and gave hugs to my two colleagues who had been in the pulpit that day.  After we walked out into the chill October morning, I looked back into the vestibule and saw the usher take out my note.  He looked outside down the walkway, caught my eye, and said, “Thank you very much.”

Some days you may come to church with only large bills, and even if you make your pledge payment faithfully by mail, you may wonder, what can I give today?  Let the spirit guide you.  I can only say that the one time I surprised the British usher, I felt the thrill of pure joy in the moment when we give and receive our offering.

On a good many Sunday mornings the offering, given and received, is a ritual that rarely provokes any exceptional notice.  If one morning there is a large bill in the plate those who can see this bill will be amazed and stop, and then be amazed again, think – “Somebody is really …..” Fill in the blank.  The attention is gathered around generosity.

During one Sunday worship in the UU Church in Brockton, MA where I serve as minister, I read this story before the offering.  There were three Brits in attendance–a groom, with his bride, and two of his groomsmen–present because of a wedding ceremony I officiated the day before.  In glancing at the offering plates when they were brought forward to the altar, I glanced down to see a 20 pound note laying on top of one plate.  I picked it up, turned around, faced the congregation, and held up the note.  I joyfully mouthed the words:   Thank You very much!

Offerings:  Remarks on Passing the Plate, by Robert A. Thayer.  2004.  Skinner House Books.  Available for purchase through the UUA Bookstore.   http://www.uuabookstore.org/productdetails.cfm?PC=659