NOTE: This story is adapted and used with permission from Luther K. Snow, congregational consultant and “Good Groups Guru,” who can be reached through www.luthersnow.com. A version of this reading was first published in his book, The Power of Asset Mapping: How Your Congregation Can Act on Its Gifts, available from the Alban Institute. 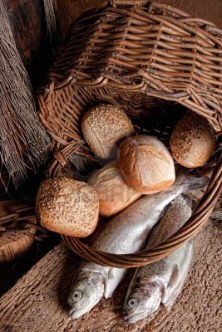 Jesus went to the other side of the Sea of Galilee, also called the Sea of Tiberias. A large crowd kept following him, because they saw the signs that he was doing for the sick. Jesus went up the mountain and sat down there with his disciples. Now the Passover, the Festival of the Jews, was near. When he looked up and saw a large crowd coming toward him, Jesus said to Philip, “Where are we to buy bread for these people to eat?” He said that to test him, for he himself knew what he was going to do. Philip answered him, “Six months’ wages would not buy enough bread for each of them to get a little.” (John 6:1-7)

When it was evening, the disciples came to him and said, “This is a deserted place, and the
hour is now late; send the crowds away so that they may go into the villages and buy food for themselves.” Jesus said to them, “They need not go away; you give them something to eat.” (Matthew 14:15-16)

One of his disciples, Andrew, Simon Peter’s brother, said to him, “There is a boy here who has five barley loaves and two fish. But what are they among so many people?” (John 6:8-9)

And [Jesus] said to his disciples, “Make them sit down in groups of about fifty each.” (Luke 9:14)

Now there was a great deal of grass in the place; so they sat down, about five thousand in
all. (John 6:10)

Taking the five loaves and the two fish, he looked up to heaven, and blessed and broke the loaves, and gave them to his disciples to set before the people; and he divided the two fish among them all. (Mark 6:41)

When they were satisfied, [Jesus] told his disciples, “Gather up the fragments left over,
so that nothing may be lost.” So they gathered them up, and from the fragments of the five barley loaves, left by those who had eaten, they filled twelve baskets. (John 6:12-13)

Those who had eaten the loaves numbered five thousand. (Mark 6:44)

When the people saw the sign that he had done, they began to say, “This is indeed the
prophet who is to come into the world.” (John 6:14)

The story of the loaves and fishes is known to be the only miracle included in all four
books of the Gospel. In both Matthew and Mark, as second, similar story is told again, with seven loaves and 4,000 people. And in both Matthew and Mark the story comes up a third time, when the disciples say they have no bread, and Jesus reminds them of the first two incidences, saying “Do you not understand?”

Clearly the great teacher wanted to emphasize the importance of leadership and understanding of stewardship as an essential part of building and providing for
a community. The stewardship leader knows the resources are present among the people and must help the community recognize and tap their abundance in responsible ways.

The disciples begin with a half-empty mindset. They are in a deserted place with thousands of needy people and immediately the conversation goes to money: not having
enough to buy what is needed; send them away to buy their own; how can this be done? Much hand-wringing and gnashing of teeth, whining and complaining goes on among
the disciples in trying to address the problem. Confidence wavers and anxiety levels spike. Sound familiar?

Each time the disciples come to Jesus, he calmly tells them, “They need not go away; you give them something to eat.” They come back expressing more doubts, and Jesus asks, “How many loaves have you? Go and see.”

In the story, Jesus wisely instructs his disciples to organize the people into smaller groups
of 50 people. The leader must also have a vision and system to help the community meet its needs, effectively manage their resources, and take care of one another.

In John’s telling, it is a child who makes the personal transformation. A child has a supper of five loaves and two fish and offers it to Jesus and the disciples. Could it be possible that young boy was the only one among the 5,000 who brought food with them? Perhaps the boy was the only one who looked into his own basket and saw what he had, instead of what he didn’t have and was willing to take action. The boy saw the need and knew that he had
something to share.

And, so all ate and were filled.

May it be so. Blessed be.

Adaptation with permission by Laurel Amabile, UUA, Stewardship and Development.